Mr. Hasler, you had an experience with hikers last year. What exactly happened?

Hansueli Hasler (HH): It was on a Sunday. From our slightly elevated farm, I saw our herd of cows running down into one corner of the pasture. I quickly got the binoculars and was horrified to see someone standing in the pasture. I jumped in the car and drove there as fast as I could. A boy about ten years old was standing in the pasture with the cows around him. His mother was standing with a dog on the path outside the fence.

What were you afraid of when you saw that?

HH: My suckler cows are trusting and used to dealing with people, I can put a halter on any of them. Still, I can't predict how they will react to an intruder. My wife and I have also been attacked by one of our cows trying to defend her calf. We know that this is not something to be trifled with. 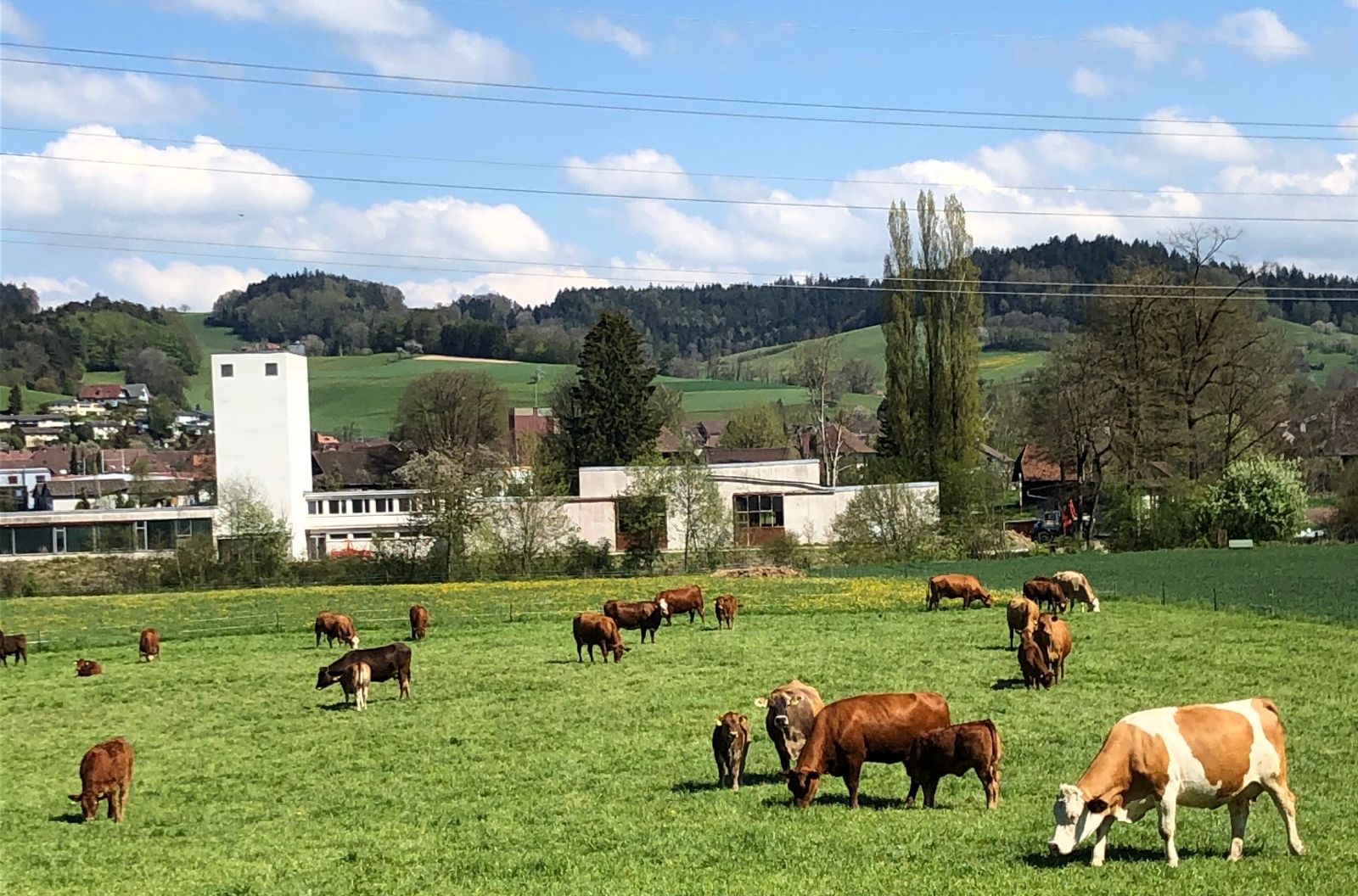 In the settlement area, encounters between cows and local recreation seekers are inevitable. Educational work should help to ensure that they are peaceful and pleasant for all those concerned. (Photo: Hansueli Hasler)

What did you do?

HH: I asked the boy what he was doing. The mother answered me that he wanted to go see the cows, just like he does with her neighbour, a dairy farmer. I explained that suckler cows react differently than dairy cows because they protect their calves. The woman wouldn’t listen to reason, she just wouldn't believe me that cows could be dangerous. I told the boy to get out of the pasture. I couldn’t accept responsibility for the situation.

Has something like this happened before or was it the first time?

HH: We get a lot of hikers. The paths don't go through the pasture, but just alongside it. Once I observed - again from our farm - a group of people on the hiking trail and a dog that kept running into the pasture and into my herd of suckler cows. When I arrived by car, I realized that a man was throwing a ball to the cows from the hiking trail and the dog was fetching it. That was why the dog kept running into the pasture. When I explained to the man that this game could be dangerous in a pasture with cows, calves and bull, he said, "Yes, I was thinking maybe that wasn’t very smart."

What have you done since the incidents?

HH: I have put green warning signs up everywhere and at the same time signs against dog excrement, because unfortunately there is also a lack of understanding here that dog excrement can damage the animals' fodder. In addition, I have reinforced the fence bordering on the hiking trail. A solid fence would be the next step, but unfortunately I am not allowed to put one up because the farmland is leased. I hope that the additional pasture fence band will keep children and dogs from crawling under it. 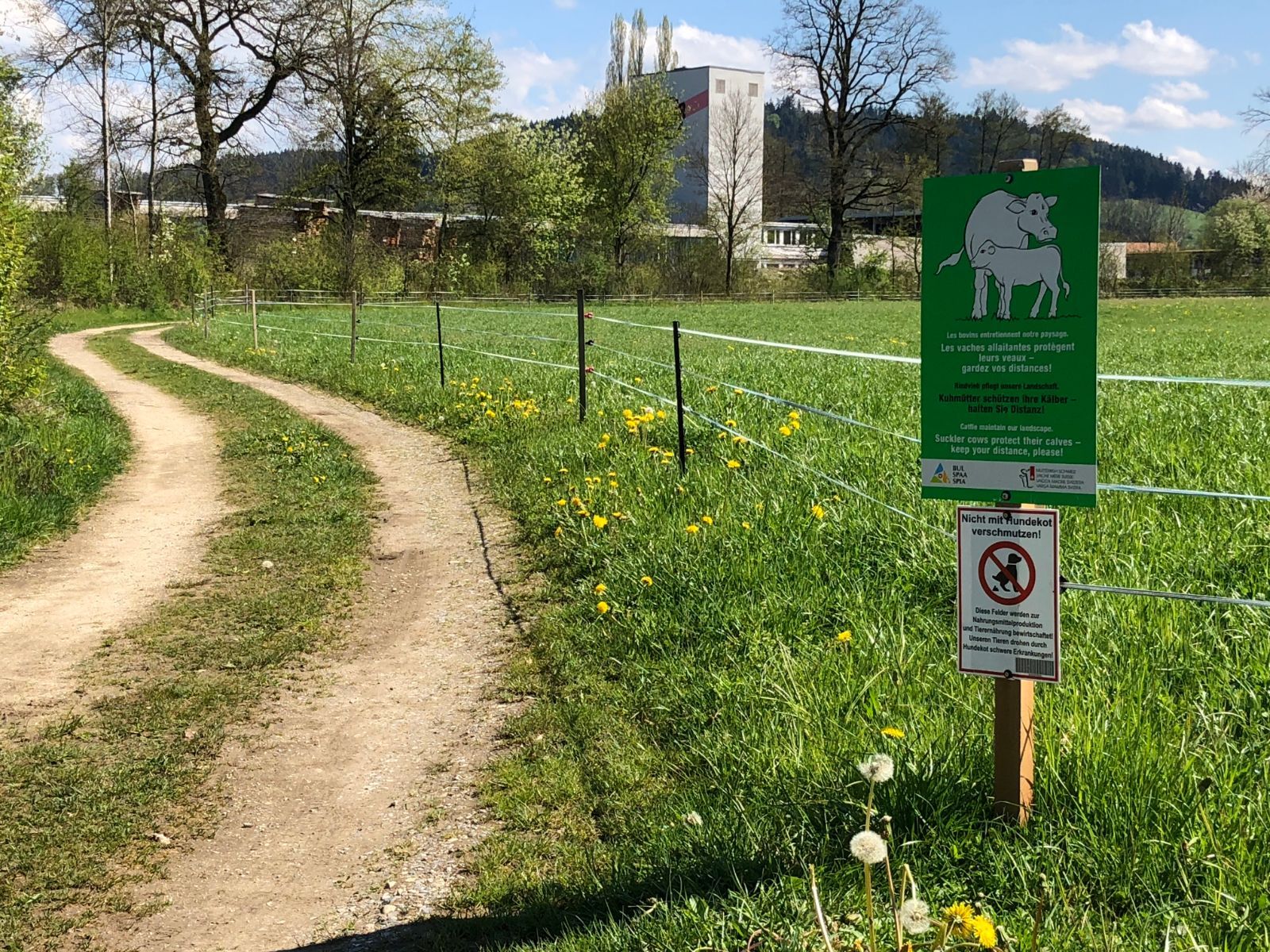 Hansueli Hasler hopes that he can prevent problematic incidents between his herd of cows and hikers with warning signs and an additional fence band. (Photo: Hansueli Hasler)

What do you think is needed to prevent accidents between suckler cows and hikers?

HH: Educational work with signs, newspaper articles and, above all, talks. We need to raise people's awareness of dangers. They have to understand that they should keep their dog on a leash and not let it out in the pasture. And they have to learn that suckler cows behave differently than dairy cows and that, in addition, bulls and calves create a different dynamic in these herds. 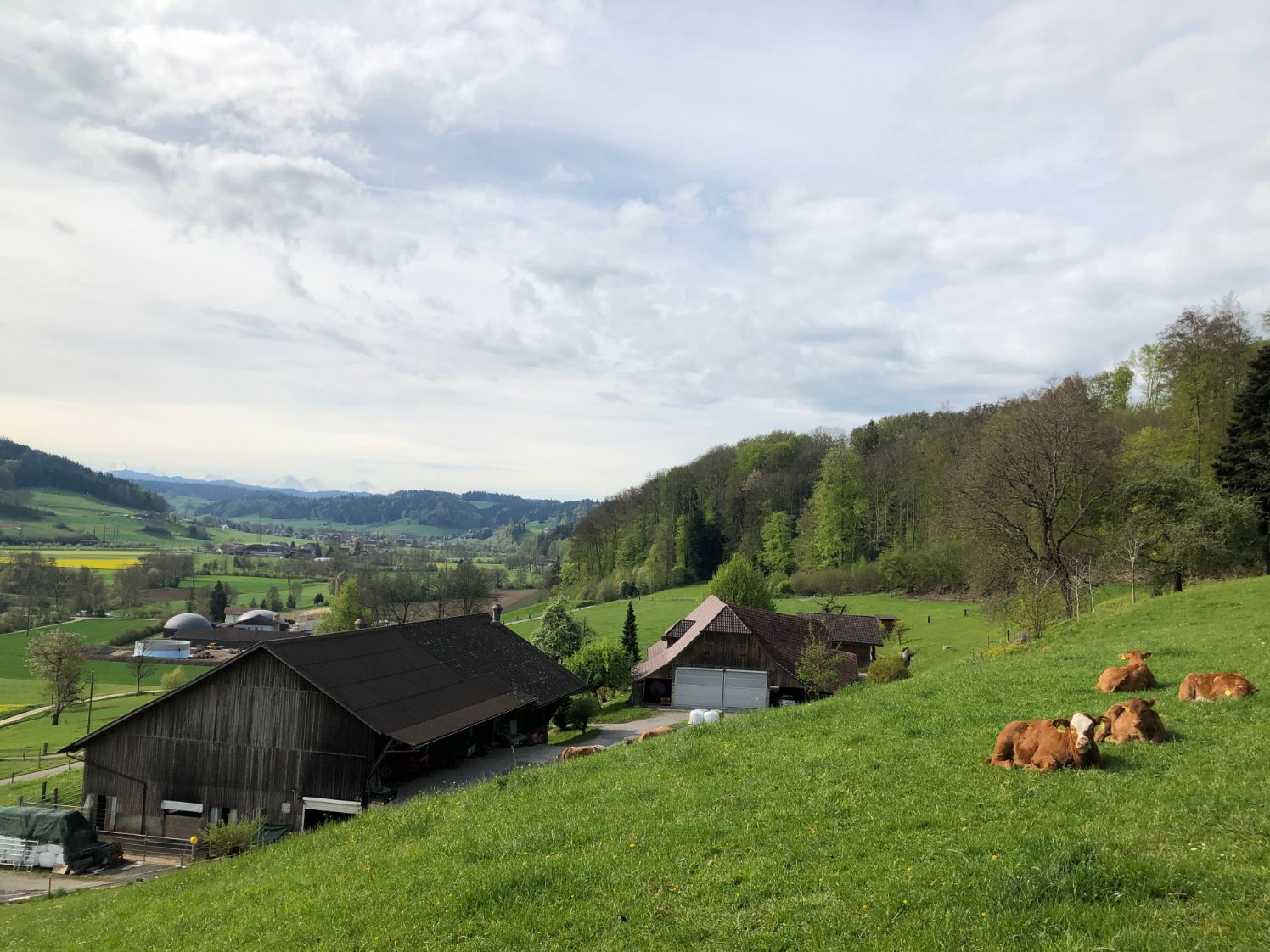 Hansueli Hasler keeps 25 suckler cows and occasionally a bull on his farm in Madiswil. His herd is made up of various breeds, mainly crosses of Limousin with Simmental or Swiss Fleckvieh. About six Natura Beef are marketed directly to regular customers per year.

The farm covers 20 hectares of agricultural land. Of this, around eight hectares are arable land, on which wheat, barley, corn, spelt and rapeseed are grown. The remaining land is pasture, meadows and ecological compensation areas.

Hansueli Hasler manages the farm alone. From time to time, he hires temporary help. His wife is responsible for accounting at Spitex and does not work on the farm. 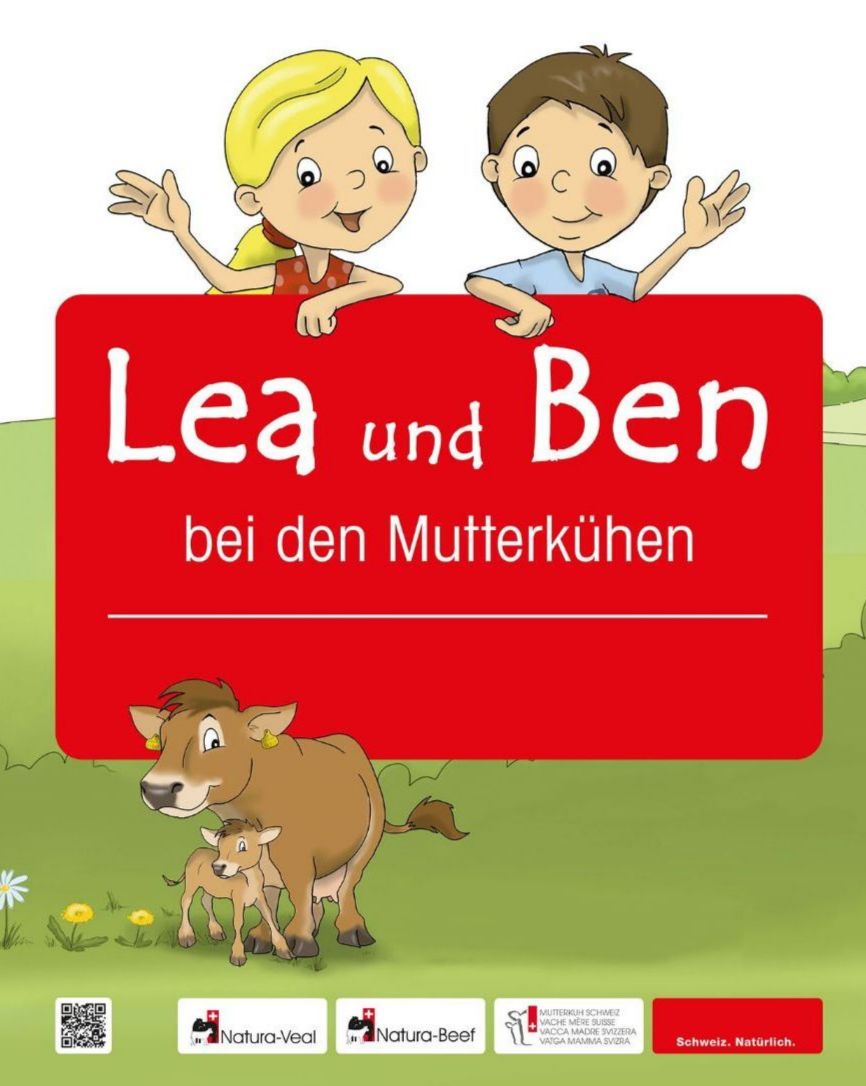 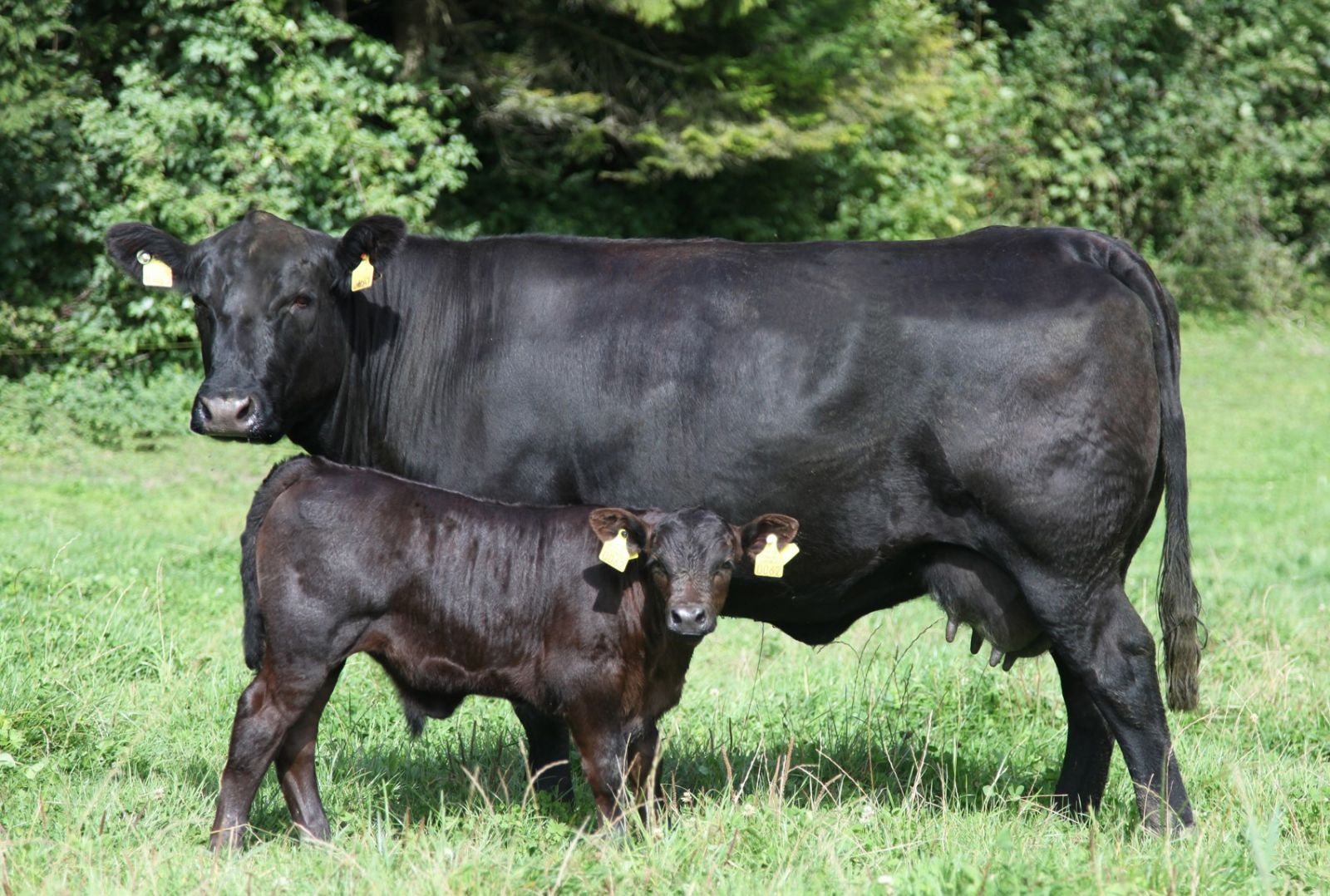 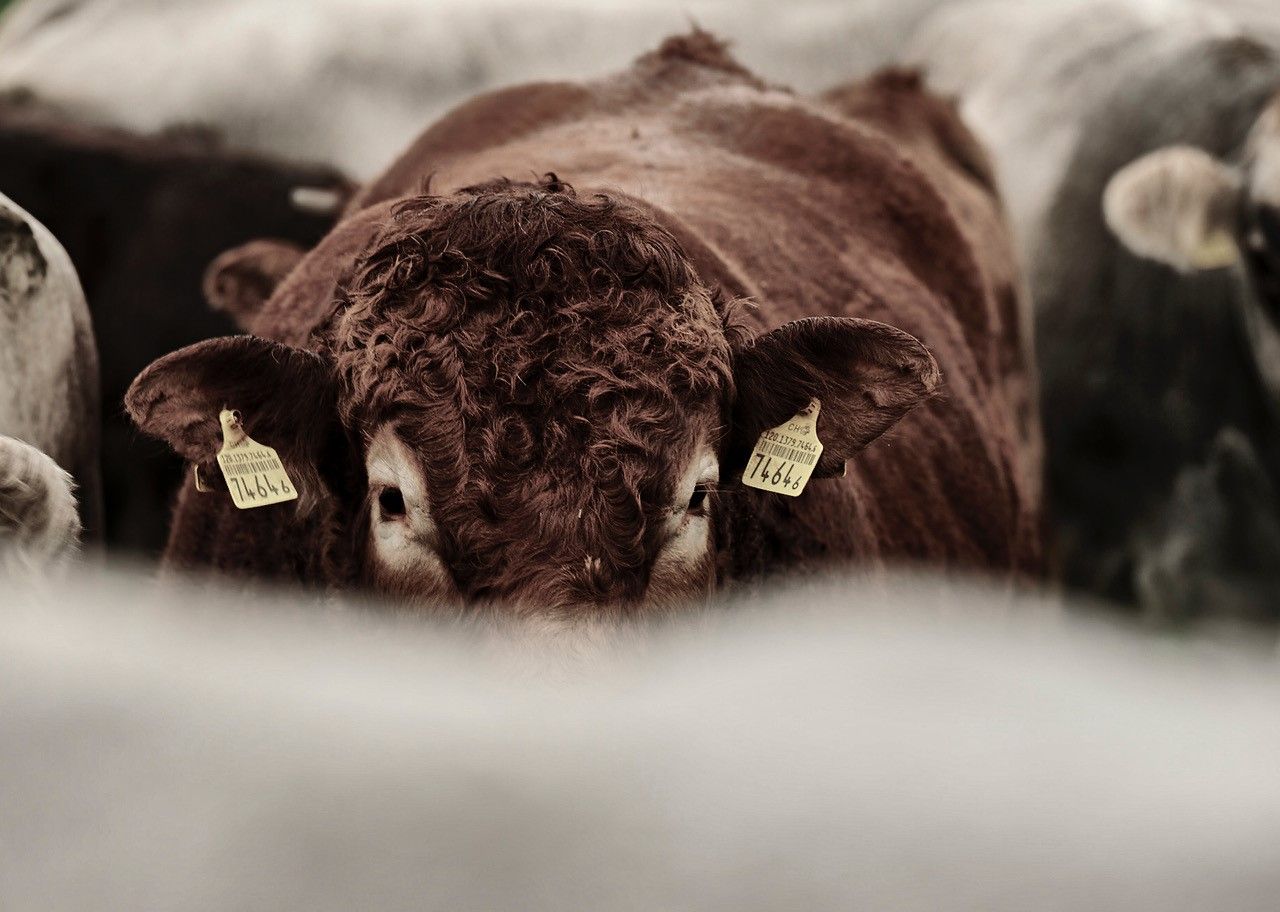 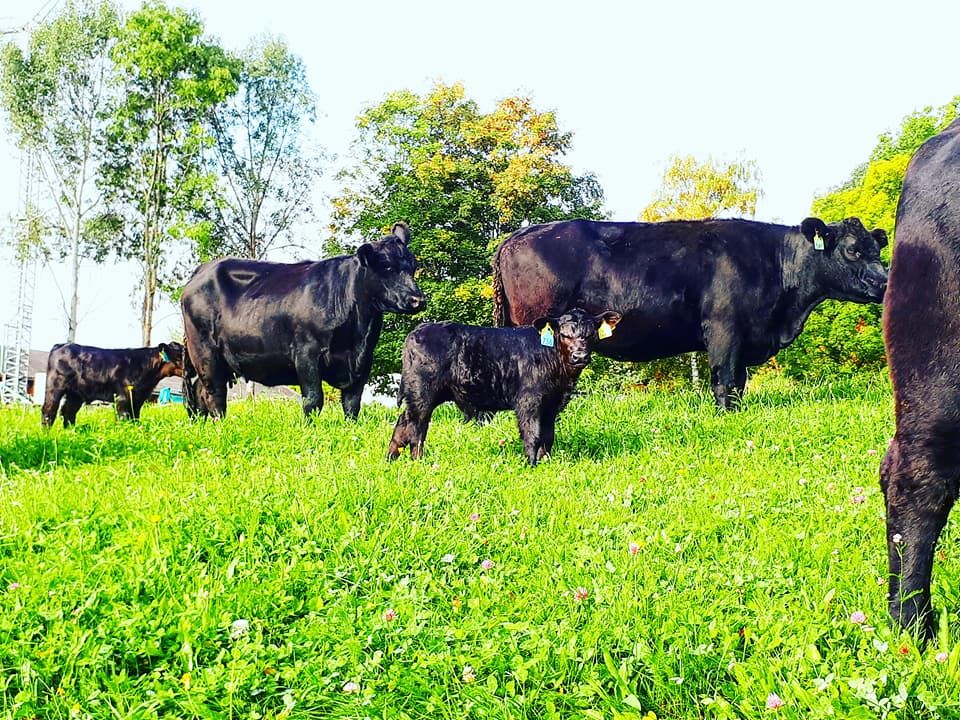 TALKING ABOUT BEEF WITH VINCENT ROTEN, SAVIÈSE
Talking about Beef 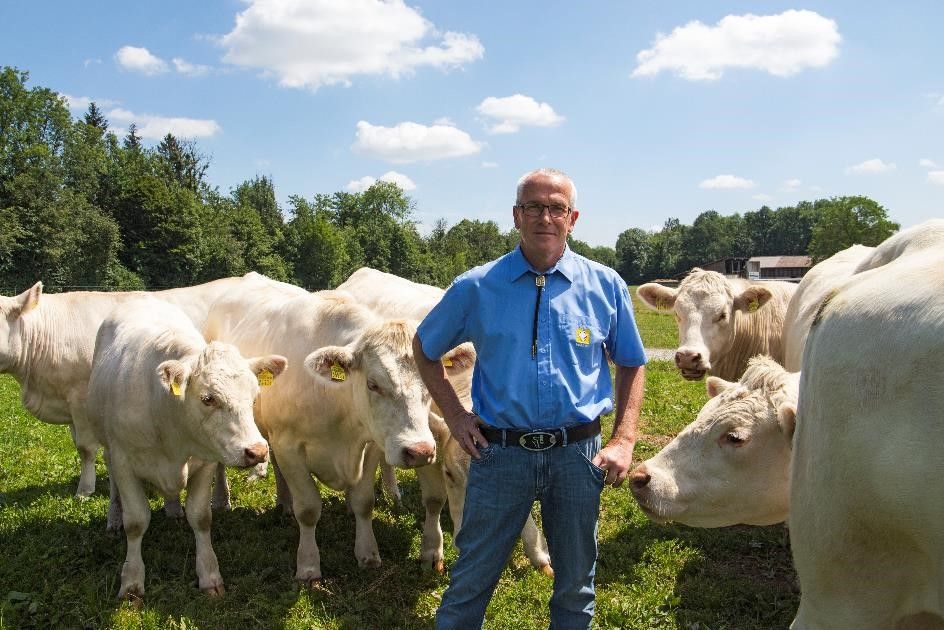