«We carry our animals in our hands»

Hansandrea Marugg explains that he and his family do their best for the well-being of their cattle and they go the extra mile. He is committed to ensure that his animals will also in future, in spite of the presence of wolves, benefit from the mountain air and alpine herbs. 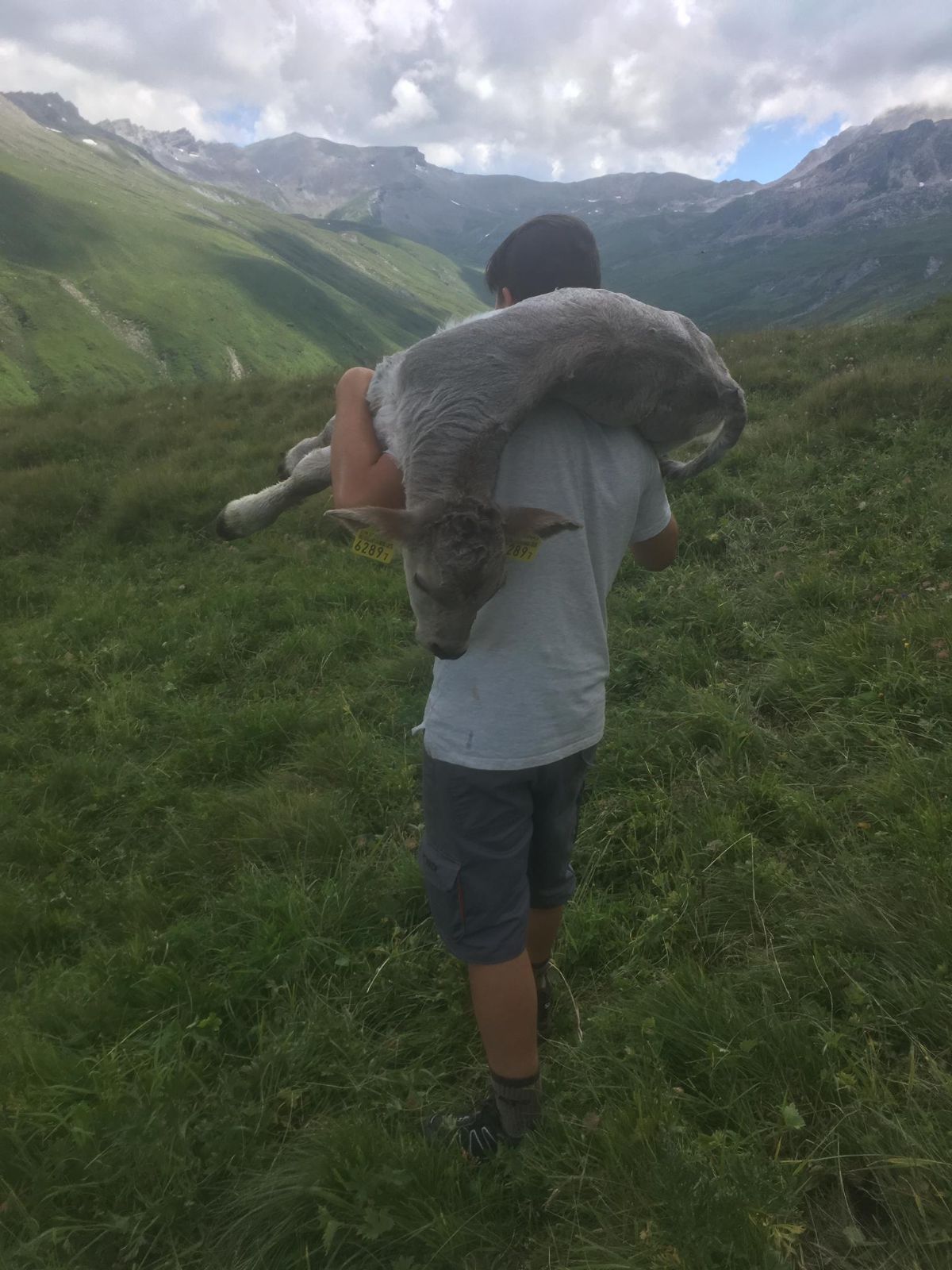 The health and wellbeing of our calves is our top priority. No effort is too much for us. We carry them in our hands or on our shoulders when the situation requires it. (Photo: Hansandrea Marugg)

Two years ago, one of our cows, Wanja, gave birth to twins on the alp. Normally, our calves weigh 40 to 50 kilos when they are born. The twins were born one to two weeks earlier than expected. One calf was fit and lively, while the other was small and weak. It weighed only 20 to 25 kilos and did not make a good impression on us. We were afraid that it would not survive without our help.

We put a halter on Wanja and I milked her by hand, in the middle of the pasture. Milking a sucker cow is already not all that straightforward. And the fact that she let herself be milked so soon after birth in the middle of a pasture, held only by a halter, borders on a miracle. But for the twins, whom we named Walerie and Wicky, it was a blessing. We were able to bottle-feed them both a litre of Biestmilch - the first milk after birth, which is so important for survival and the immune system. 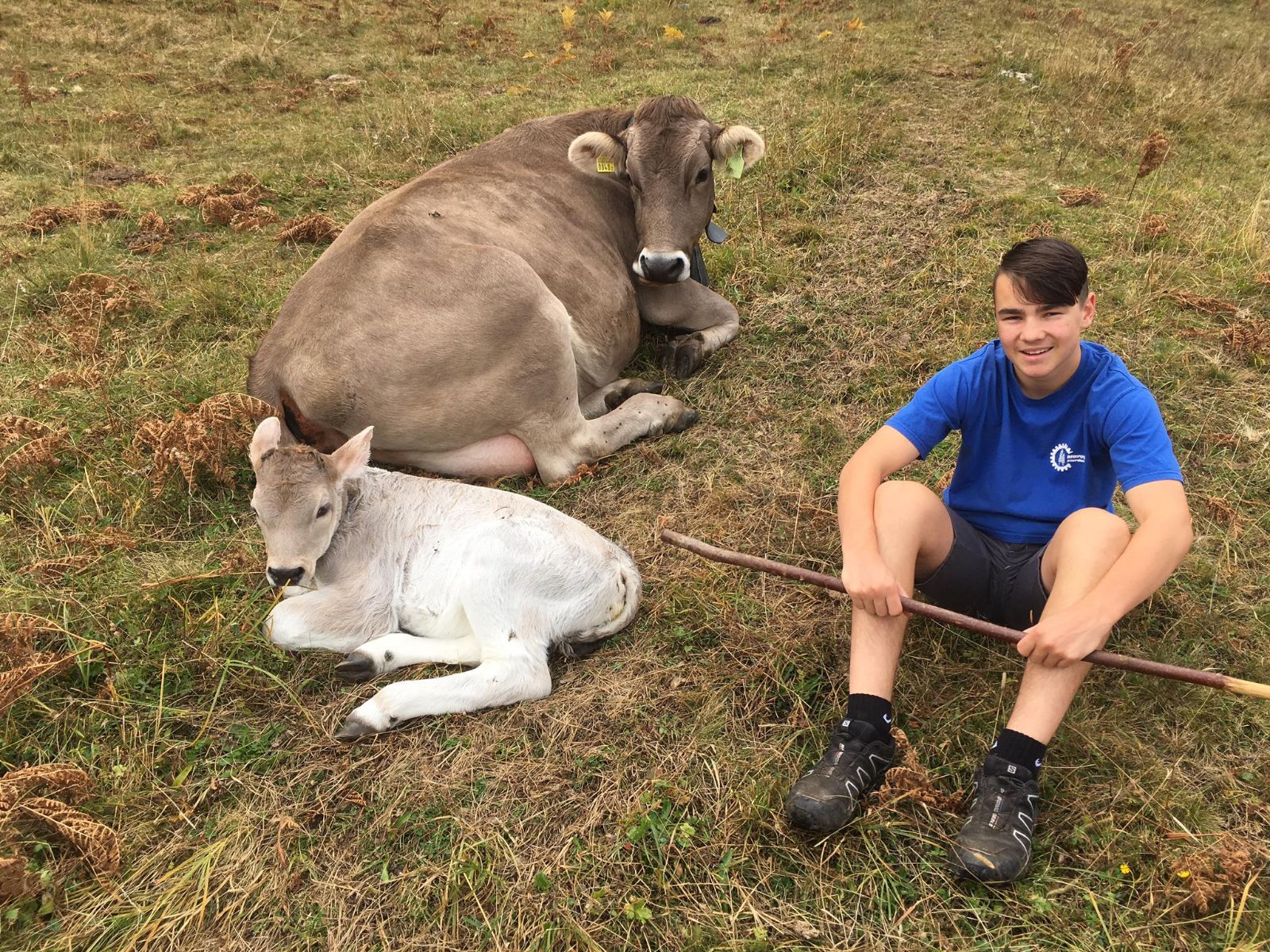 Damian Marugg likes to be with suckler cows and calves on the Alp. (Photo: Hansandrea Marugg)

Afterwards we thought about what to do. Since we weren’t expecting the birth yet, the suckler cow herd was then at one of the most remote points of the alp, far from the alp hut. The smaller of the two calves, Wicky, needed attention and milk from the bottle, four to five times a day. The mountain herdsman already had enough to do. We could not burden him with this extra work, especially since there was no hut in this corner of the alp.

So we decided to take Wicky with us to the valley. But that is not so easy on an almost impassable alp. Without further ado, my son Damian took the calf on his shoulders and carried it down into the valley. We set out on the usual path, but this meant we had to cross the herd of cows. The suckler cows almost freaked out when we tried to pass them with the mooing calf on our shoulders, so we decided to walk down the steep slope at the back of the alp.

We took the calf to a colleague with dairy cows and fed it milk under a heat lamp. We bottle-fed it several times a day.

Meanwhile, the herdsman continued to take care of the herd, including Wanja with Walerie, the larger of the twins. Walerie got on well with the suckler cow and also nursed on its own.

A few days later we brought the mother home together with Walerie. She was lively and healthy. Amazingly, despite the time they had been separated, Wanja accepted her second calf again without any problems and from then on the twins could both be with their mother and nurse from her udder. The twins grew and thrived splendidly.

On our alp there were always cows that gave birth in the summer. For the period of the births, the herd was always in a pasture near the hut, so that the shepherd could monitor the animals closely and help in case of problems.

Since last year, however, I no longer bring highly pregnant cows to this alp because of the wolves. I take them to a mountain pasture on the Präzer Alp, which I can reach from home in ten minutes. We are still improving the calving pastures in order to protect the animals from the large predators. 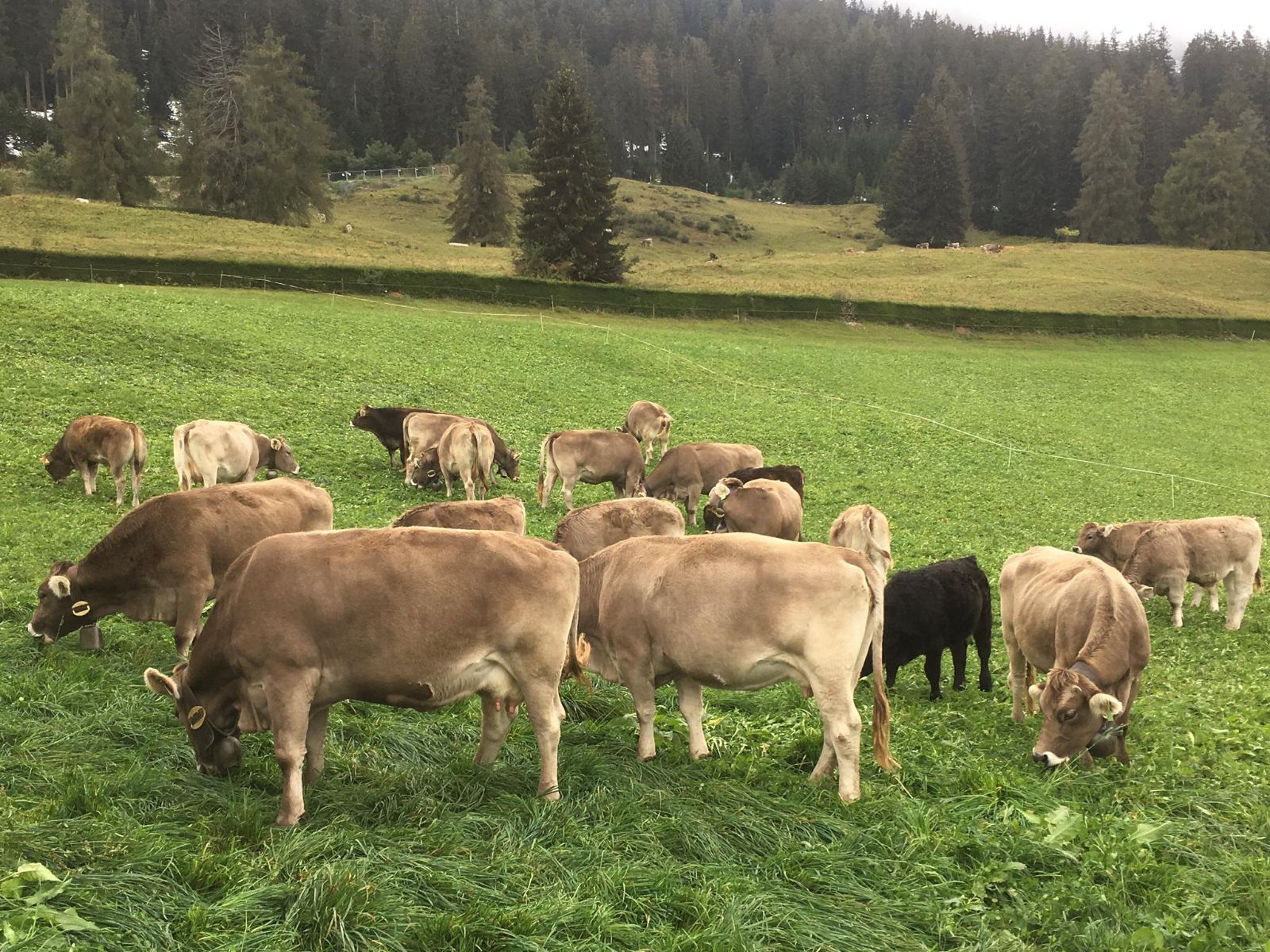 I am sure that if a wolf had found the smaller of the two twins before we did, it would not have survived. For us, it was a blessing that the mother of the twins was so trusting, let herself be milked without any problems and let us get close to the calves. Against a wolf this tameness would have been her undoing, because she would not have defended her calves.

Here is a contradiction and a big challenge for future coexistence with the wolf. We want trusting, good-natured suckler cows that do not attack the farmer or any hikers to defend their calves. At the same time, we expect them to defend themselves and their calves from the wolf. And we want hiking tourists to be able to continue to walk across the pastures in the Alps without any worries. This coexistence will only work if mutual understanding is there and the rules and warnings are observed and followed by everyone. 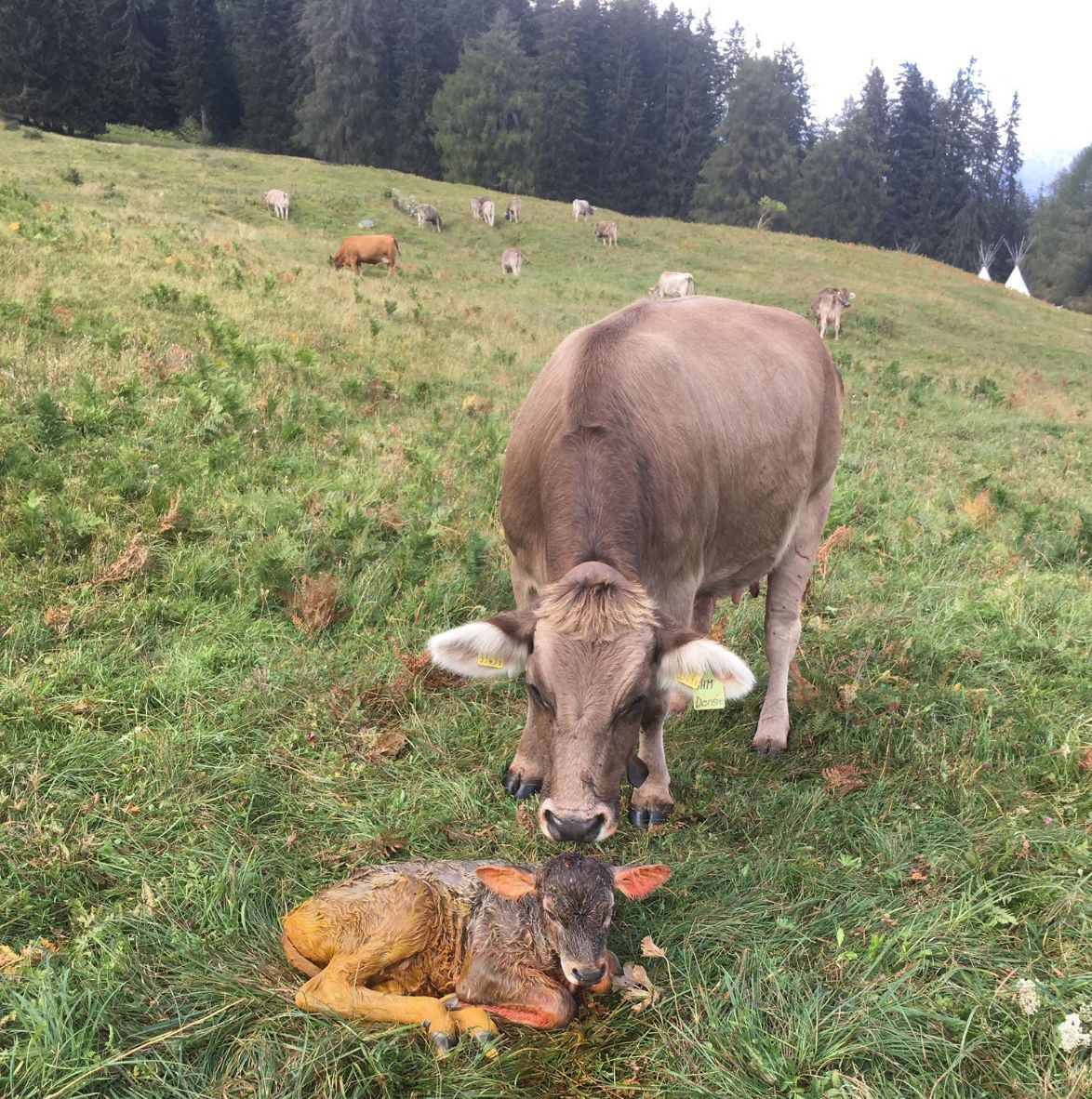 A suckler cow with her freshly born calf. A pasture birth is the most natural thing in the world. But it is important that suckler cows calve in protected pastures and are monitored to protect them from wolf attacks and avoid contact with hikers. (Photo: Hansandrea Marugg)